Skip to content
Battlestar Galactica was a hit mainly due to STAR WARS opening the eyes of a generation to intergalactic war, and we couldn’t get enough. So the networks came up with Galactica, aka  Bonanza in space!  (Missing in this photo is his younger son, actor/ pop singer Rick Springfield who was killed in the first episode!)

The “Vipers” were the fighter jets and were super cool even if they didn’t make any sense, all engine, and no fuel.  There were a few electric carts inside the ships of the ragtag fleet, but nothing that would count as “star cars”.  Then the reboot of the series “Battlestar Galactica: 1980” brought to the little screen some super cool motorcycles, that also happened to fly!
The Model Shop was on such a tight schedule, they were designing, building, and painting the three motorcycles at the same time. Patterns for some parts were being carved in foam while other finished parts were being painted. The model crew was working on a half motorcycle when time ran out and the effects crew simply cut a finished motorcycle in half. Production waits for no one. The base motorcycle was a Yamaha MX 175. It was bought from North Hollywood Yamaha by Richard Bennett in 1979.

Yamaha MX 175
Base Motorcycle, Yamaha MX 175. Note a launch tube section and the Draconia from Buck Rogers in the background. 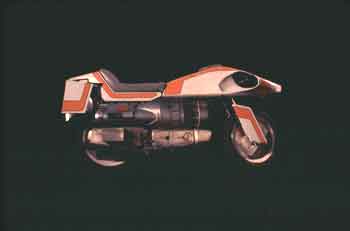 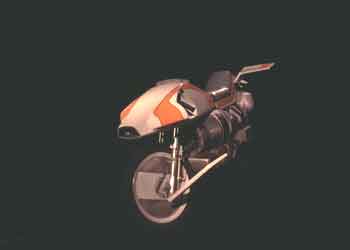 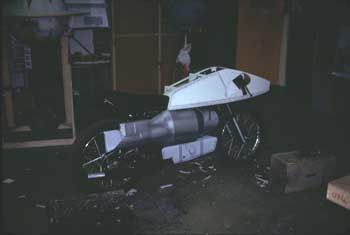 We designed the motorcycles as we built them. Note finished fiberglass parts and foam core study parts. 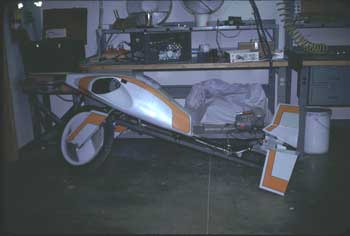 We built two full functioning motorcycles and one dummy which was a working motorcycle, but without the moving wings and other added mechanicals. Unfortunately, we were not finished with the dummy when they needed a half motorcycle to hang on a helicopter, so they chopped a functional motorcycle in half. 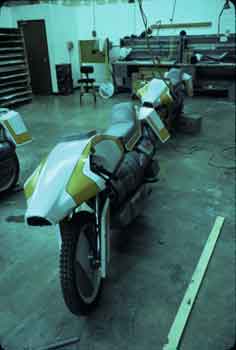 Kenneth A. Larson, AKA Ken Larson, was involved with Battlestar Galactica and Galactica 1980 as model maker starting with about the sixth episode. This is when Universal Hartland took over from MCA-57. Ken Larson was already working on Buck Rogers when Universal Hartland was established. Kenneth A. Larson is now a Set Designer who often designs CGI sets and well as Visual Effects models.
Most of the first half of Kenneth Larson’s three decades in the entertainment industry was spent designing and building models for Visual Effects. He worked on Battlestar Galactica concurrently with Buck Rogers in the 25th Century and Airport ’79. In the Fall of 1979, work began on Galactica 1980 and Ken Larson worked concurrently on Buck Rogers and Galactica 1980. 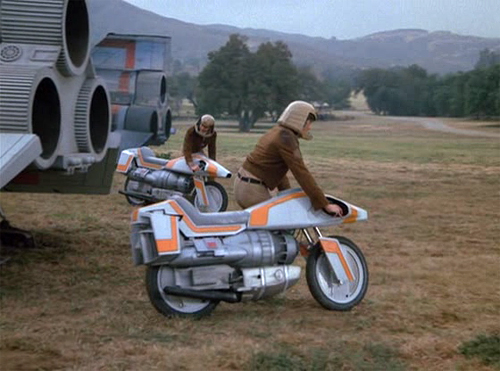